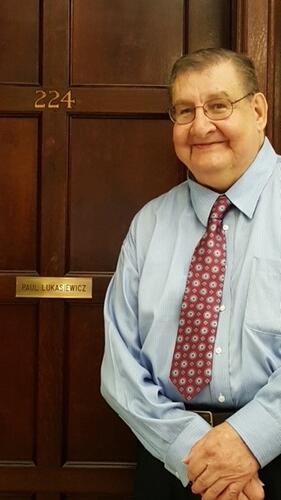 Paul Lukasiewicz passed away on July 4.

In 2017, Paul retired from a five-decade career at the Mathematics Library with 52 years of service to Yale University. Paul began his employment at the Law Library. He soon moved to the Mathematics Library following a successful interview with library champion Professor Shizuo Kakutani. For much of his career, Paul served as the solo full-time staff member. He effectively handled a wide range of responsibilities: from selection, acquisition, and cataloging to public and access services.

When Paul began his career, the automated systems we rely on today did not exist. In addition to gaining an understanding of the various catalog management systems in use over the years, Paul possessed an encyclopedic knowledge of the collection, which expanded during his tenure from being housed in a single room to three rooms.

Paul was dedicated to providing to excellent service. His generous personality endeared him to the faculty, students, and staff of the Mathematics Department. He fondly remembered the students he assisted over the years and maintained a display of publications by alumni. It was not unusual for visiting former students to stop by and greet him. Paul helped to organize an interdepartmental softball league and played on the Mathematics Department team for several years.

“In addition to Paul’s always cheerful presence, he was keenly aware of the mathematical interests of the faculty. I was gratified and impressed every time he told me when a new book had arrived which was of interest to me.” – Yair Minsky

“It is hard to overstate Paul’s value as a friend, and a cheerful presence.  He kept us informed individually about new books that might interest us, sought our advice about what books to acquire, and routinely went above and beyond the call to be helpful to us and to our visitors.”  - Richard Beals

“Paul was an extremely warm person with a sincere dedication to our tightly knit community.” – Gregg Zuckerman