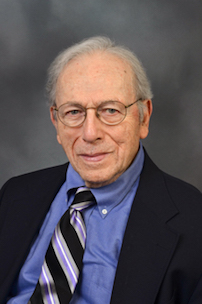 The department is saddened by the death of George Daniel Mostow, Henry Ford II Professor Emeritus of Mathematics, on April 4, 2017.

Professor Mostow is well known for his groundbreaking work in Lie groups and geometry, most notably his famous Strong Rigidity Theorem. He came to Yale in 1961 and retired in 1998, after a distinguished career of research, teaching and service that included chairing the department from 1971 to 1974. He served as president of the American Mathematical Society in 1987-88. He was a member of the National Academy of Sciences, and was awarded the AMS Leroy Steele Prize in 1993 and the Wolf Prize in 2013.

Funeral Services will be held at Congregation B’nai Jacob, 75 Rimmon Rd., Woodbridge Thursday afternoon, April 6th at 2 PM, with Interment Services to follow at the B’nai Jacob Memorial Park, 200 Wintergreen Ave., New Haven.  Memorial Contributions may be sent to the Joseph Slifka Center for Jewish Life at Yale, 80 Wall St., New Haven, CT 06510 or to the Charity of One’s Choice.