Written by Miki and the prize recipients.

The mathematics department congratulates this year’s graduating seniors. We are very proud of all of you!

This year’s Mathematics prizes were announced on Monday, May 23, at an afternoon math department celebration.

For this article, we asked each recipient to write a few lines about their future plans, and to share advice that they would give to new Yale mathematics majors.

The DeForest prizes for proficiency in pure and applied mathematics are awarded to Sarah Zhao and Fernando Trejos Suárez. 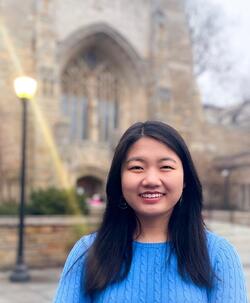 Sarah will be pursuing a MPhil in Advanced Computer Science at Cambridge University next year with a focus on machine learning. She will then be starting graduate school at Stanford in Statistics. Over the summer, she looks forward to catching up on some reading and visiting friends on both coasts.

Don’t be afraid to ask questions! I remember when I first went to office hours, I was super intimidated by the ULAs and TAs. Now, as a ULA myself, I can’t wait to hear any and all student questions! While you can do math alone, it’s so much more fun to do it with others — and more often than not, seemingly simple questions can lead down really fascinating rabbit holes. 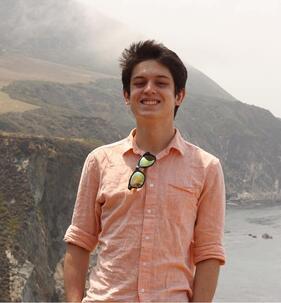 Fernando will be starting a PhD program in mathematics at Princeton next year, where he hopes to study number theory. He looks forward to spending the beginning of the summer at home in Costa Rica, and then travelling with friends in the USA and abroad as much as he can. Hopefully, he will find time to read and play the piano, two habits that he really hopes to bring to graduate school.

Slow down. It’s natural to feel pressure to get ahead, and as a result, skip prerequisites in order to take advanced classes. But those classes are always going to be there, and they’ll be much more fun and more satisfying when you have a strong foundation in the basics. It’s always important to stop and smell the roses—not just because nailing the little details will make you a better mathematician, but because math is made to be experienced slowly and collaboratively, rather than as a race to the finish line.

The George Beckwith prize for proficiency in astronomy or mathematics is awarded to Yulan Zhang. 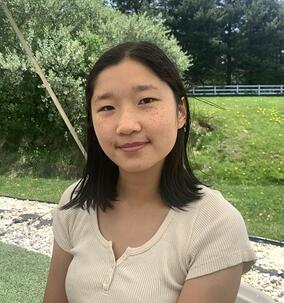 Yulan will start working full-time at Jane Street in New York City next fall. This summer she will participate in an REU, and she plans to read lots of books and run.

I think it’s important to remember to take things at your own pace. Being surrounded by so many amazing students, it’s easy to feel pressured to have to catch up or keep up with our peers. Everyone, however, comes from different backgrounds and has different circumstances, so it’s important not to lose sight of what helps us as individuals do our best, both in and outside of math.

The Anthony D. Stanley memorial prize, given out to a junior for excellence in pure and applied mathematics, is awarded to Hamilton Wan. 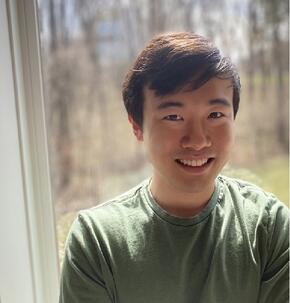 Hamilton is looking forward to a summer of math research, long walks, fumbling through pieces on the piano, and spending time with his family and dog. He is also excited - and a little surprised - to be starting his senior year soon.

Don’t worry too much about not understanding concepts on your first tries at learning them! In my experience, I’ve had to revisit the same topics over and over again before things finally started falling a bit more into place. And while it is valuable to spend time working independently, I think my most rewarding mathematical experiences have come from reaching out to my professors and discussing with my peers. Attend office hours, form study groups, and most importantly, don’t be afraid to ask questions (to emphasize oft-stated advice: no matter how basic my questions felt, I think there was always at least one other person wondering the same thing). Finally, don’t underestimate the importance of physical health. As tempting as it may be to stay up until 5 am working on a tantalizing problem (I might be a bit of a hypocrite here…), it’s not worth it - sleep!

Wenrui is a junior interested in geometry. This summer, he is going to spend more time on cooking and piano besides math research. His favorite composer is J.S. Bach.

The research project is on the (p, q)-problem for hypersurfaces. The (p, q)-problem for convex sets is a famous topic in discrete geometry, which studies the minimal number of points (the Hadwiger-Debrunner number) that pierce an arbitrary family of n convex sets in R^d satisfying the (p, q)-property, i.e. every p sets of the family contain q sets with non-empty intersection. Surprisingly, Alon and Kleitman showed that such number is finite and depends on p, q, d only, independent of n, the size of the family of convex sets. Following this, the asymptotic bounds for the Hadwiger-Debrunner number keeps getting improved. We hope to find a similar result when the (p, q)-property is applied to hypersurfaces, which restricts to the roots of polynomials of d variables and degree at most D, and see if the minimal piercing number depends only on p, q, d, D in this case. The hypersurface case seems promising, for Hilbert Nullstellensatz translates the geometric problem of intersection of hypersurfaces into an algebraic one studying the ideal generated by their corresponding polynomials, and this could be handled by algebraic methods similar to those developed for convex sets. If the conjecture is true, we will also adapt the tools for studying convex sets to find asymptotic bounds.

You may feel that each statement in lectures looks clear to you, but you are unsure about the big picture and where these are proceeding. Active exploration with patience may help you gather your knowledge, find connections among areas within math or between math and other subjects, and inspire you to go further.

In addition to our own prizes, two math majors, Matt King and Sarah Zhao, were awarded the Russell Henry Chittenden Prize!

Congratulations to the prize winners, and to all graduating seniors.